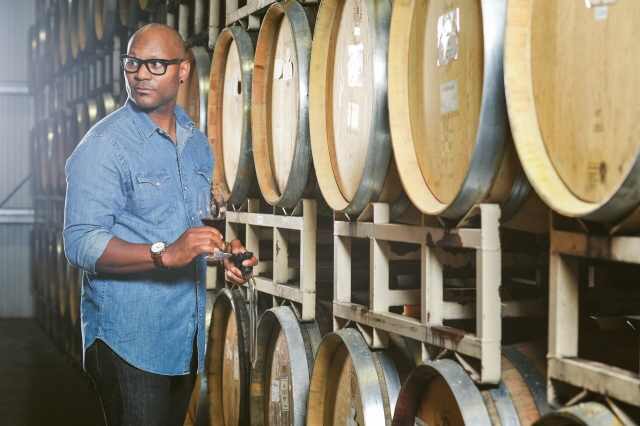 Andre Hueston Mack, founder of Mouton Noir wines, (Photo credit: Sash Photography)
Black consumers took the initiative to “buy Black” over the weekend, but it’s likely that many of us don’t know all of our options. Social media led the way for Black small businesses to advertise their products, but we’re certain a large group of wine connoisseurs aren’t aware of Andre Hueston Mack and his Mouton Noir Wines brand. To throw in another Black history fact: As one of the top black winemakers in the country, Andre Hueston Mack owns Mouton Noir Wines, which is sold in over 40 states and 12 countries; selling over 30,000 cases of wine a year.

Mack founded Mouton Noir in 2007 with no money and no investors, leveraging only his resources from his days as an award-winning sommelier for Michelin star chef/restaurateur Thomas Keller at both French Laundry and Per Se. Always one to think outside of the box, Mack created the first culinary coloring book in 2014. And in 2016, he will be launching another wine startup unrelated to Mouton Noir.

Determined to change the way Blacks viewed wine culture, he looks for opportunities to educate others about the history of wine culture so that it isn’t viewed as exclusive. “Making wine and drinking wine is not new to African Americans and others in the Diaspora. South Africa has a three-century history in growing, harvesting and distilling grapes as wine. The entire continent of Africa has a history in wine-making. In this country, slaves cultivated the vineyards owned by Thomas Jefferson and other vintners,” he says.

Mack says one of biggest misconceptions he wants to dispel is that wine is reserved for the elite or the privileged. “Drinking wine was not historically limited to people who could afford it. Western and European culture turned it into an elite thing. Winemakers were farmers and field workers. Everyday people. And that’s who should enjoy and have access to wine,” he says.

“The common myth is that African Americans aren’t well-educated about wine, but in truth, we’re like everyone else. We like what we like – high or low,” Mack says. “A $100 bottle of wine can taste as awful as a $2 bottle, and the opposite is true, as well. If you know what you like, buy it. But don’t just buy it because it’s expensive.”

He encourages everyone to become acquainted with their preferences with wine and wants people to view it as a staple. “People should have fun with wine. A bottle should sit on your dinner table like all of the other condiments,” Mack advises.

For those looking for a little information before their purchase, he encourages taking a wine-tasting class at a local wine shop or store like Whole Foods. “Ask the sommelier at a favorite local restaurant if he or she offers classes or tutoring.”

Mack’s last bit of advice is probably the most important.

“Black vintners in this country make some really great wines. Explore a wine list and you will find at least one of our wines in the best restaurants. Buy a bottle for your table, and let management know you appreciate them including a Black winemaker in their stock.”