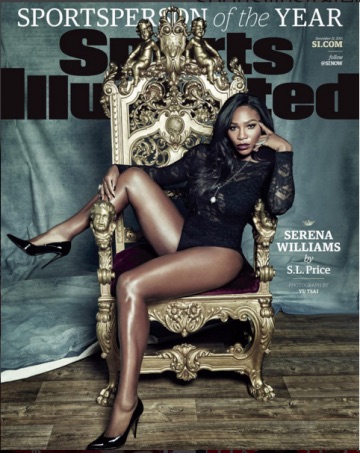 And the 2015 Sportsperson of the Year is none other than Serena Williams. The 21 Grand Slam title holder was photographed by YuTsai for the amazing December 2015 cover. But dsgruntled sports fans on social media are upset that she beat American Pharaoh. Yes, the American Thoroughbred racehorse — a hoofed, odd-toed mammal to be exact and sans the brand name. They have the audacity to say American Pharaoh is not your average horse because he is horse racing’s first Triple Crown winner in 37 years.

Foolishness. Williams is not your average tennis player. She is above the rest, a world record breaker — a stallion born and bred to be a tennis phenomenon. She won 53 of 56 matches played this year, three of the four Grand Slam events, and held the No. 1 spot in the WTA rankings every week.

“…we are honoring Serena Williams too for reasons that hang in the grayer, less comfortable ether, where issues such as race and femininity collide with the games.

“She was a difference-maker in other areas, speaking out against bodyshamers in both words and actions, posing for the Annie Leibovitz–shot Pirelli calendar in only a bikini bottom. The cover shot of this issue? Her inspiration, intended, like the Pirelli shots, to express her own ideal of femininity, strength, power. Her curiosity was ravenous, as she enrolled in an online history of civil rights class at UMass,guest-edited the October issue of Wired and announced her return to Indian Wells in an essay in SI’s sister publication, Time.

“She is not perfect, and assorted confrontations with, and perceived slights of, tournament officials, opponents and the public at large will find their way into her narrative, this one included. But as a performer, as a doer, as a symbol, no one extended themselves and embraced the best (and worst) the sports world has to offer quite like Serena Williams, champion, 2015 Sportsperson of the Year.”